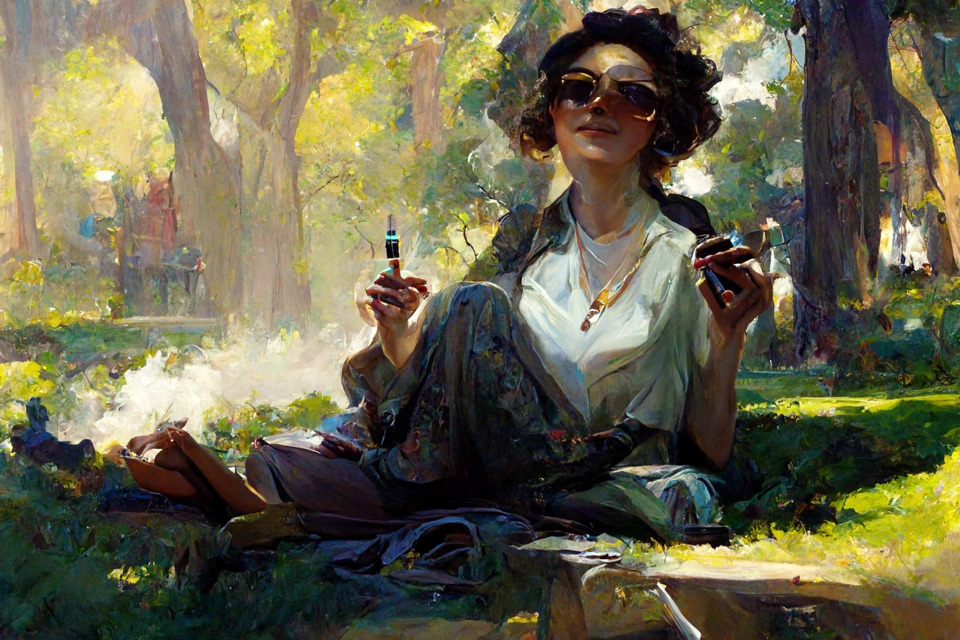 Similarly to second-hand smoking, second-hand vaping exposure to non-smokers has harmful effects of smoking just by being near the vaper.

Let’s start by understanding what second-hand vaping is.

What is second-hand vaping?

Recall those moments when you are in the middle of a bubble-gum-scented vapor from a vaper’s vape pen. Did you read any special meaning to that? You probably did not, considering the smoke-like vapor is not coming directly from you. Instead, what you experienced was second-hand vaping.

Second-hand vaping is passive exposure to nicotine vapor. When a vaper or e-cigarette user exhales smoke or aerosol from his vape pen or mod, it lingers in the air long enough that anyone nearby can inhale some. This is different from inhaling second-hand smoke because vape kits do not produce smoke but vapor. Sources of second-hand vaping aerosols include burning or heating tobacco through an electronic cigarette.

What is in the second-hand vapor?

Unlike cigarette smoke, vaping mods and pens’ vapor does not contain tar or carbon monoxide. Instead, the vapor components are often liquid forms of metals and chemicals, including formaldehyde, acrolein, benzene, diacetyl, nickel, tin, and lead. You will also find trace levels of flavorings, nicotine (if the vaper uses nicotine), vegetable glycerin, and propylene glycol.

These components are in tiny amounts, meaning the level of toxicants is remarkedly lower than what we have in smoke. But does that mean second-hand vapors are not harmful when inhaled?

There are tons of scientific evidence that confirm the dangers of breathing in second-hand cigarette smoke. However, there is little to ensure the same for second-hand vapor. This may be due to the relatively new nature of e-cigarettes and how they work.

In terms of research, the content of e-cigarettes vapor inhaled has been the subject of further investigation by scientists. But the exhaled vapor contains so little contamination that it is hardly considered to be of any risk to bystanders, or better put, second-hand vapers.

A 2016 study at the University of California, San Francisco, also reported that about 94% of the nicotine inhaled during vaping stays in the user’s body system, with only 6% making it out as part of the exhaled vapor. Nicotine and other liquid particles that make up the vapor from e-cigarettes do not affect the surrounding air, especially indoor air quality.

The analyses of air in vape shops have shown that levels of toxicants are mostly below occupational exposure limits.

Check out this study undertaken by the National Institute for Occupational Safety and Health (NIOSH). It confirmed that the air in a shop where multiple customers vaped during the day contains no nicotine. Additionally, it noted minimal and allowable amounts of formaldehyde and flavoring chemicals.

Interestingly, while the vapor from second-hand vaping is considered safe, it could pose health risks for anyone with a weaker immune system. That explains why certain states and territories are restricting where people can vote.

The American Nonsmokers’ Rights Foundation reported that 19 states and over 900 municipalities had banned electronic smoking devices and cigarettes in specific environments, including schools, hospitals, and workplaces.

Is it safe to vape around babies?

We mentioned how the effects of second-hand vaping remain unclear around medically vulnerable populations earlier. Interestingly, babies fall into this category. So that is the first reason you may want to reconsider vaping around your baby.

Understandably, there is scarce research because no researcher is ready to risk a kid’s health by exposing them to second-hand nicotine. But there is sufficient data to suggest that a baby’s health is at risk when exposed to second-hand vapor from e-cigarettes.

The portion of the second-hand vapor that bystanders do not inhale ends up on the ground and surrounding surfaces. Babies and kids might lick these contaminated surfaces and thus be at risk of exposure. That is why vapers are generally advised to avoid vaping around babies and keep their vaping kit out of the reach of kids.

Let’s be clear, the toxicity of the chemicals from second-hand vaping has been verified. However, there’s limited long-term research proving second-hand vaping is neither as harmful as second-hand smoke nor completely harmless. But one thing is clear—vaping around your kids can encourage them to also vape when they are of age.

Whether or not you want to let that happen is up to you.

Despite being unharmful to people around, it is essential to respect the concerns of people around vapers, including friends, families, and colleagues, about second-hand vaping vapor. That is why you should only vape in designated areas. However, suppose you ever have to use your e-cigarettes in public places or among other people. In that case, you should ask if they are comfortable inhaling the second-hand vapor from your e-cigarettes. Finally, it would be best to not vape around your baby.